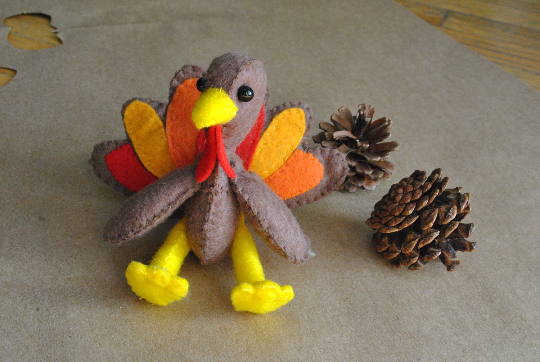 I first created this felt turkey stuffed animal pattern about a bajillion years ago (no really just about 6 or 7) for a old crafting website I used to publish. I held onto it for a long time. I even sold some of these little handmade felt turkeys in my Etsy shop!

Somewhere, someone, has this very turkey sitting on a shelf somewhere, or perhaps he or she brings it out during the holidays to sit on the Thanksgiving dinner table!

After I took down the crafting site, for years I would receive emails from people who had come across the photos of the turkey in my social media accounts. Everyone wanted to know “where could they find this stuffed animal pattern??”

So by popular demand, last year I republished the turkey pattern in conjunction with the sewing blog SewMamaSew!

And finally, after all these years, I’m sharing the free printable pattern and tutorial here with you!

What Materials Will You Need?

Begin by printing the free turkey sewing pattern. Use the pattern to cut all of the different felt pieces necessary for creating the felt turkey.

We’ll start to sew the turkey by constructing the body first. If you are using safety style doll eyes on posts, you’ll want to install these first.

Pin the main body pieces together and begin sewing at the back of the body.

When you reach the front of the turkey’s head, begin sewing the front face gusset in place on one side.

Tie off your thread at the back of the felt turkey body. Begin sewing again at the frot of the head, sewing the opposite side of the face gusset in place.

Sew until there is a small opening left, large enough to stuff the body full of stuffing.

Next to create the turkey’s beautiful plumage! Using the turkey stuffed animal pattern, you should have cute several “feathers” in different colors. Pin several in place so that you may alternate colors. Sew the first few feathers in place.

Continue sewing feathers in place in this same manner until the plumage is full of beautiful, festive colors.

Once the feathers are sewn into place, sandwich the two plumage pieces together and sew the outer edges together.

Match together the two sets of wings. Sew around the edges starting at the back of the wing, leaving a small space open for stuffing. Fill each wing gently with cotton stuffing. Sew the opening shut.

Now to create the turkey’s legs! Match together both leg pieces and feet.

Sew the feet together on the outer edges, leaving a space open for light stuffing. Stuff the feet with a small amount of cotton stuffing and then sew the opening shut.

I like to also add stitches to create separate toes on the turkey’s feet.

Repeat the same steps for the leg, sewing the outer edges and leaving the end open. Stuff the leg with cotton stuffing.

Pin the leg to the foot and begin sewing it into place. Repeat all steps to create the second leg and foot.

Pin the beak in place on the front of the face and sew it in place as well. You can also choose to add waddles at this time.

Pin the felt turkey body to the sewn feather plumage.

Sew the body to the plumage with small stitches in the back. The smaller stitching will help for the stitches to blend in.

Attach the turkey wings with string joints. Creating string joints is basically stitching over and over in place to hold the appendages on in a way that they can still move and pose.

After sewing both wings in place, move on to sewing both legs on in the same way… with string joints!

Once both legs and wings are in place you’ve got yourself a super cute felt turkey stuffed animal!

I do hope you’ve enjoyed my pattern and tutorial! I’d love to see what you’ve made with my free turkey stuffed animal pattern! Stop by my social media and post a pic of your work. I may even feature it!

Looking for some more free projects to dip your crafting toes into? Swing on over to my Free Felt  Sewing Patterns Section to have a Look See…

If you’ve enjoyed this turkey sewing pattern, you might also really enjoy my Mama Hen and Chicks pattern!